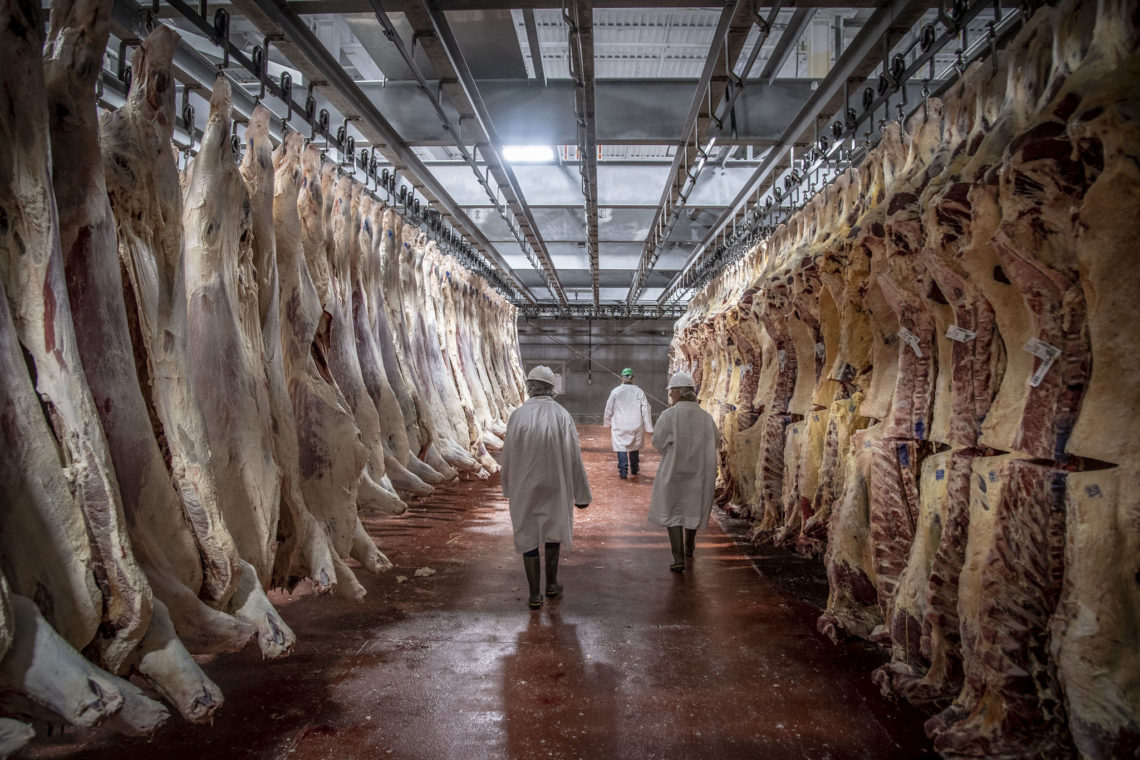 The photo shows U.S. Department of Agriculture meat inspectors and graders performing their mission in the United States (2018). In Germany a major Coronavirus outbreak in slaughterhouses in 2020 has sparked discussions about working conditions. Source: USDA, photo by Preston Keres / Public domain

The outbreak of Covid-19 infections in German slaughterhouses reveals the hidden cost of our schnitzel: the exploitation of workers from Eastern Europe.

Every generation of German sociologists toiled under its own master concept, one that gave meaning to their discipline, guided empirical research and anchored public debate. In the post-war epoch, it was the Industriegesellschaft that fulfilled this function. With the rise of structural unemployment in the 1970s, the emergence of the service sector and the gradual feminization of the workforce, the Arbeitsgesellschaft replaced the old constellation of the social market, and pointed out a momentous change in the distribution of male industrial jobs and traditional gender roles. More recently, as Germans saw unemployment reaching ten percent by the end of the 1990s against the background of unification, much ink has been spilled on tracing the contours of yet another type of society – Risikogesellschaft -– transcending the first two, a new configuration geared toward the management of myriad risks, social or otherwise. What, then, of our present?

Before the Covid-19 pandemic, with the economies of the EU member states all but recovered from the slump of the early 2010s, Munich sociologist Stephan Lessenich proposed the notion of Externalisierungsgesellschaft. In a passionately argued book combining moral outrage and Biblical imagery – Neben uns die Sintflut – Lessenich explained that the affluent lifestyles of contemporary Germans are possible only because the social costs of their wellbeing are incurred by the rest of the planet. To grasp this absurdity, a double history was necessary, narrating in one breath the misfortune of the others and our very own good fortune: present in our daily food and cosmetics, palm oil is nowadays indispensable for our comfort, while palm oil plantations flattened Indonesia’s rainforests; and so too did soya plantations, as more and more land was cleared up in Argentina, pesticides causing record spikes in cancer deaths for the inhabitants of Ituzaingó. Germans acquired the habit of eating shrimp, notes Lessenich, but how many of them think of the vast aquafarms eradicating the mangroves in Thailand and how many of them realize the amount of forced labour, recruited from nearby Laos, Myanmar and Cambodia, required in the process? It is the people and nature of the Global South that bears the brunt for the West’s welfare.1

Such was the starting point of Lessenich’s critique. Missing from his geography of the used and abused – of externalized costs invoiced across the globe from Latin America to Southeast Asia – was Germany itself: Rosendahl, Coesfeld, Osnabrück, Niederlehme, Verl, Wildeshausen, Rheda-Wiedenbrück, Oldenburg – all locations of abattoirs making the news over the last months, and all currently hotbeds of Covid-19. This chain of places attracted a torrent of commentary in the German media, mostly focused on the horrendous working conditions of foreign workers in the meat industry. Such discussion was hardly surprising, for unlike Lessenich’s examples this was not so much a case of externalizing the costs of wellbeing in faraway places – tourist destinations for the popular imagination – but rather one of walling them off inside the country, in small towns or villages, out of sight of most Germans. Yet none of the facts were new: temporary workers dispatched from Southeastern and Eastern Europe by recruiting agencies under precarious labour contracts or contracts for service (Werkverträge) form the backbone of the industry for at least a decade. New was the context: Taylorist processing lines, crammed cantinas and overcrowded housing facilitated the spread of the virus, brigading working bodies with resting bodies, round the clock, for weeks in a row, at 9.35 EURO/hour, much to the outcry of local communities forced under lockdown.

Why did it take us so long to acknowledge the social costs of our schnitzel?

Hypocrisy is part of the answer. But more important is what Florin Poenaru and Costi Rogozanu call Eastern Europeans’ “paradoxical privilege”.

Yet, the manner in which Romanian and other Eastern European workers were shipped off, in total disregard for their safety and with the permission of their own governments, highlights the specifics of labour migration in the EU, where a common market and open internal borders allow workers to traverse freely between ostensibly equal member states. Hidden behind this formal equality, however, are the silent compulsions of material necessity that drive hundreds of thousands from the poorer East and South to move West. At the heart of Europe is a highly profitable industry specialized in importing cheap labour from the East to various core countries. This fact is nothing new, but is seldom discussed as a fundamental characteristic of the European project.2

It is in the nature of this paradoxical privilege to bracket any consideration of rights, labour law and structural inequality, limiting all discussion to questions of wages and personal responsibility. This is what defined the public discourse in Romania over the last few months. Past May, at the peak of the pandemic, as thousands of Romanians queued at Cluj airport awaiting their flights to Germany’s asparagus fields, the country’s most popular talking-head, journalist Cristian Tudor Popescu denounced the alleged privilege of these seasonal workers, free to move under lockdown to secure high wages abroad: “They go to work in Germany. Maybe I want to go to work as well, but the authorities won’t let me. Police would stop me in the street, asking where I go. If I tell them ‘I, too, go to work’ they would reply ‘Your company is closed, the government shut it down’.”3 Confronted by a listener during his weekly radio show, Popescu stuck to his conviction: to earn up to 3,000 a month during the pandemic, he explained, was proof of a lack of responsibility on the part of the workers, endangering by their greedy choice the safety of all.4 That this was hardly a choice was brushed aside. And so too was the overwhelming evidence that average wages were significantly lower, anywhere between 900 and 1,500 euro per month.

More recently, the magical figure of 3,000 returned to the news, this time thanks to magnate Ion Țiriac. A personal friend of Clemens Tönnies, Țiriac provided the daily Libertatea with a sample of ten payrolls of Romanian workers hired by Tönnies meat plants, all showing wages reaching the 3,000 EUR per month mark: “I’d knew Tönnies for thirty years, and he always told me that Romanian workers are the best, serious people whom you can trust. Slavery is when we send people to pick asparagus, not when they work for Europe’s largest butcher on decent wages!”5 A former manager to Boris Becker, Țiriac was a prominent presence on German talk-shows in the 1980s, where he would speak about his newly acquired wealth and passion for vintage cars – a success story if there ever was one of talent overcoming poor beginnings in his native land and business acumen pulling him above the mass of Eastern European immigrants to the West.6

His first billion, however, was made in post-socialist Romania, where Țiriac built a business empire, his every pronouncement widely revered as the embodiment of wisdom itself, liberally dispensed by the country chief entrepreneur. The only instance of criticism directed at Țiriac occurred in relation to his slaughtering of wild boar, in yearly hunting sessions on his Transylvanian enclosure and in the company of Europe’s wealthiest. This was a form of elite socializing, cementing bonds of friendships that could prove useful: Tönnies, Țiriac confessed, “is now very upset; of course, it is not right what is happening now because he cares about his people. I vouch for Clemens! Keep this in mind: his Romanian employees earn up to 3,000 EUR per month. You do not call this slavery!”5 As Tönnies’s Romanian workers pointed out, such wages were totally exceptional, hardly one in one thousand employees taking home anything close to that.

If such PR stunts were expected, what, then, of the Romanian government’s reaction to the entire affair? Minister of Labour Violeta Alexandru, from the Liberal Party, travelled to Germany in late May to assess the situation. There, she seemed impressed with the way German authorities handled the issue, and later admitted the problem predated the pandemic: “We are witnessing a series of systemic problems which we had mishandled”, she declared.7 After meetings with her German counterpart, Alexandru found comfort in the commitment of Hubertus Heil to end the regime of employment predicated on recruitment agencies. “Mine was not a regular visit. Without false modesty, I was the one to draw the attention of German authorities to this problem. I am the first minister to visit workers abroad.”8 What Alexandru saw in Germany was also clear: “I saw the reality with my own eyes: there are good working conditions for Romanians employed in Germany, in slaughterhouses as well as in agriculture.”9 It was thus unjust to blame Germany for what was happening. She went on to argue: “On average, seasonal Romanian workers earn 7.10 EUR/hour net, so if you add it up, roughly 2,000 EUR per month. Some earn even more, those who are very diligent, they can take home even double that.”10 Basic arithmetic aside, such was the official take of the Romanian state. Heil at least admitted to shame. Alexandru afforded herself no such feeling.

It took a global pandemic to commit the Merkel cabinet to a change in the labour legislation under which hundreds of thousands of Eastern European workers toil in Germany. And it took a virus to unmute the silenced voices of seasonal workers, their bodies now deemed dangerous to the host country, in addition to being “essential” to the production of its meat. During the past months, Lessenich’s Externalisierungsgesellschaft was revealed to have been discreetly lodged in the heart of Europe, muted inside noisy slaughterhouses, hidden from sight across vegetable farms or in care homes. How much this change of legislation will contribute to more humane working conditions is anyone’s guess. The inbuilt structural inequality that kept it outside public eye and government intervention for so long is here to stay. This is the true meaning of Minister Violeta Alexandru’s words quoted above: a shameless admission of the “paradoxical privilege” of her citizenry – the freedom of working abroad as the only imaginable solution to the impoverished lives at home.

Adrian Grama has a PhD from the Central European University in Budapest and is currently a fellow at the New Europe College in Bucharest.