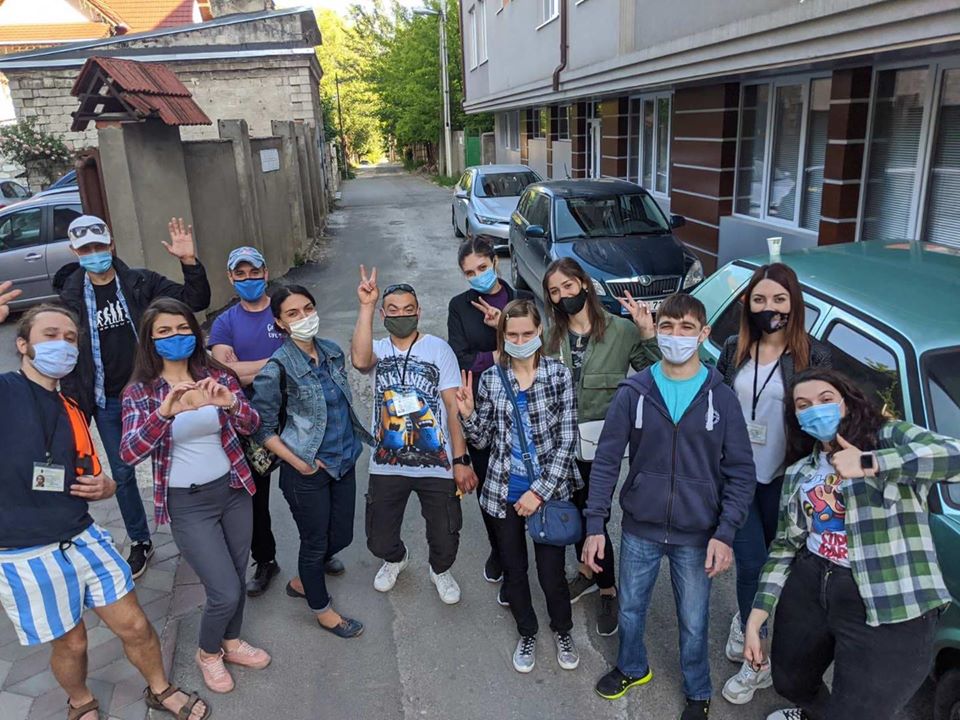 A group of volunteers of „Together against COVID-19 Initiative”

The COVID-19 pandemic revealed, as in a drop of water, a series of weaknesses but also unsuspected strengths of the Moldovan state and society.

At a population of fewer than 3 million inhabitants (and 3.5 million with Transnistria), Moldova registers, at the time of writing, 10,321 cases of COVID-19 infections and 371 fatalities, that is, 2,558 cases of infection and 92 deaths per 1 million inhabitants (for comparison, in neighbouring Romania, the ratio are 1,088 cases of infection and 71 deaths per 1 million). Some independent experts criticize these official data due to the small number of tests carried out (15,697 per 1 million – compared to 27,051 tests per 1 million in Romania or 56,036 in Germany, for example). At the same time, part of the population considers the official estimates as exaggerated and denies the gravity of the crisis.

The pandemic caught the state unprepared, as the authorities themselves confessed, bringing to the fore a weak and inefficient health system which led to a high number of infections among medical staff (up to 30% of the total number of infected people). Likewise, inconsistent quarantine measures and the premature lifting of restrictions have been criticized. Society has shown itself quite atomized and distrustful during the pandemic, often opposing state action.

Judging upon the results of the opinion polls carried out in May, the current crisis reveals the low “social capital” of Moldovan society.1 Confidence in politicians and state authorities has now reached its lowest levels: according to a poll, 58% of respondents do not trust any politician.2 The low confidence in the political establishment led to a deficient trust in the official interpretation of the events in the context of the pandemic and, at the same time, to broad receptivity for conspiracy theories. According to the same opinion poll, half of the respondents admitted that “the [COVID-19] virus is no more dangerous than common flu, and everything is done intentionally to destroy the economy.” To be precise, president Igor Dodon himself made a similar statement in a live program on Facebook. Moreover, 32.7% of respondents agree with the statement that “Coronavirus is a myth, in fact, there is no dangerous virus, and everything around it is a lie.” 37.8% agreed with the statement that “The virus was created by Bill Gates or other rich people to require universal vaccination and thus control the number of the population.” We must admit that, following a series of high-scale corruption scandals and especially the “theft of the century” at the end of 2014, low trust in politicians and in state structures appears as an explicable strategy of defence and survival vis-a-vis a state that has lost its legitimacy. Also, media and communication experts explain the massive distrust and denial of COVID, on the one hand, by the extremely aggressive media campaign promoted by some media sites (many of them administered in Russia) and, on the other hand, by the inefficient communication of the Moldovan government for informing the population.

However, the lack of trust in the state and politicians is also the reverse side of weak social cohesion. Thus, as the same recent surveys show, the measures of “social distancing” went hand in hand with the increase of social distance(perception of social difference) towards specific groups, and especially towards Moldovan migrants returning from Italy and other European countries, but also the urban poor and COVID-infected persons.3 In the case of financial problems, the vast majority would rely on relatives, family and friends, and much less on state institutions. This perception of social support also shows that the type of “horizontal” solidarity (between members of a network of relatives and friends) is much more developed than the “vertical” solidarity between various groups of society.

Unlike many Asian countries, but like other European countries, Moldova has not experienced a pandemic of similar proportions in recent decades. The WHO itself predicted an explosion in the number of people infected with COVID-19 to more than 30,000 cases by mid-April (12 times more than there were, in reality, with about 2,000 infected people in mid-April). The panic that arose at the beginning gave way to widespread distrust, frustration and dissatisfaction.

Deeply embedded within kinship and friendship networks, most Moldovans experienced the quarantine as a form of violence against their psychosocial nature. It is not surprising, therefore, that the partial lifting of the restrictions, with the end of the state of emergency on May 15, caused an outbreak of resocialization and released some social pressure, with adverse effects on the curve of COVID-19 infections, growing steadily so far.

The Orthodox Church, especially the Metropolitan Church of Moldova, which is subordinated to the Moscow Patriarchate, sabotaged the quarantine established by the authorities. More recently, the Metropolitan Church issued a statement justifying the darkest conspiracy scenarios (about the alleged involvement of Bill Gates, 5G waves, and world and national authorities in the spread of the virus). Enjoying the highest rate of trust, the Orthodox Church openly opposes the institutions of temporal power, which are in a constant loss of trust and support from citizens. An irony of fate is that Bishop Marchel, until recently one of the most virulent promoters of conspiracy theories about COVID, fell ill with COVID himself and is being treated in a hospital in the region. Asked by journalists, the bishop is now urging the population to take the virus seriously and follow all precautions to prevent its spread.

The pandemic also provoked, at least in Chişinău, manifestations of solidarity that few would have expected before. Since the first days of the quarantine, several restaurant chains have offered free lunches to medical staff in hospitals and clinics and to vulnerable city dwellers. Taxi and private drivers volunteered to transport doctors to and from work. A grassroots group, calling itself “Together Against COVID-19,” mobilized hundreds of volunteers through Facebook to help the elderly and other vulnerable people with food packages.

Another informal group called the “Blue Hut” (metaphor of the sky as a roof) raised an impressive amount of money in record time through a crowdfunding campaign on the Internet to ensure homeless people with food and essential products after the suspension of the activity of soup kitchens. The “Blue Hut” initiative emerged within an informal protest group in Chişinău, called “Occupy Guguță”, who five years ago opposed the construction of a multi-storey hotel in the Central Park of the capital city in place of the dilapidated building of the well-known Soviet times café Guguță, and later organized an open space for debates called “permanent protest.” The involvement of the “Occupy Guguță” activists in support of the homeless in the context of the pandemic appears as a move from political activism to the social one.4 Ultimately, this commitment stems from a political stance, insofar as it counteracts a lack of action on the part of the state and non-governmental organizations towards certain groups of “undeserving poor”.

Of course, certain limitations and weaknesses of these organized forms of solidarity may also be mentioned. One of them would be their concentration within Chişinău municipality, which is also the area most affected by the pandemic. Another weakness of these initiatives is their weak sustainability. At the time of writing, the “Blue Hut” group has suspended its activity, reaching a point of fatigue. However, according to the organizers, this group, and probably other grassroots initiatives as well, will be able to formalize their activity and possibly form the core of civic reaction to future social and health cataclysms.

As noted by Vitalie Sprînceană, an activist of the “Blue Hut” movement, the current pandemic management model that comes down to “Stay at Home” leads to the atomization of society and does not offer solutions in support of all social strata, especially not for the most disadvantaged people. The solitary “stay at home” model should, therefore, be replaced by a solidary “stay at home”, which would facilitate support flowing to vulnerable social strata and those whose vulnerability was exacerbated by the quarantine.

As some ongoing research suggests5, the societies that have had the most success in fighting pandemics are those that have displayed higher “social capital” and cohesion manifested, inter alia, by the spirit of solidarity of citizens and their capacity for collective action, in complement to the state’s actions, or despite the mismanagement of the crisis by the state institutions. In this sense, the manifestations of civic activism “beyond or against the state” (to borrow the expression by Abel Polese), as well as the grassroots actions of political and civic protest, are an alternative to the nihilistic and anomic lack of social trust towards state institutions, as evident in Moldova.

The ongoing crisis will undoubtedly continue to provide food for thought to the decision-makers but also to civil society leaders, especially on the resilience of society and the capacity of state institutions to intervene effectively, in crises and on a daily basis. One of the measures to think about would certainly be the increase of “social capital,” by growing the capacity of the society for cohesion and mutual aid.

Executive politics in Russia in times of the pandemic: Shifting responsibility and blame as a technology of governance

Petru Negura, PhD, is associate professor at Free International University of Moldova (Chisinau) and senior researcher at the Centre for Sociology and Social Psychology, the Institute of Legal, Political and Sociological Research in Moldova.

Any cookies that may not be particularly necessary for the website to function and is used specifically to collect user personal data via analytics, ads, other embedded contents are termed as non-necessary cookies. It is mandatory to procure user consent prior to running these cookies on your website.