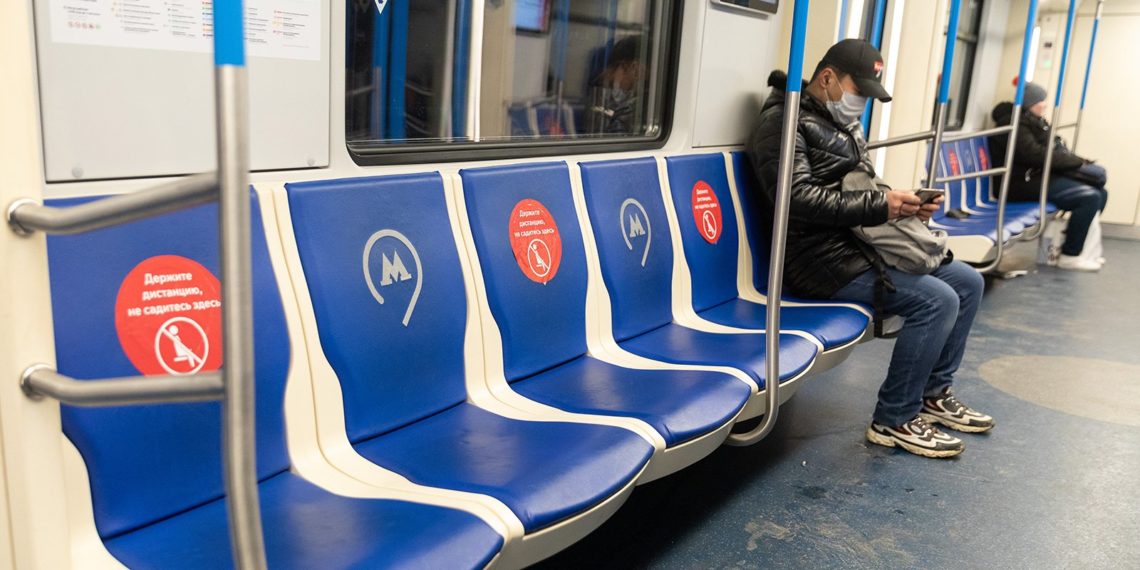 Distancing measures in the Moscow metro. Source: Mos.ru / CC BY 4.0

This article explains how Russia reacted to the pandemic – and why you need a code to travel around Moscow.

The first case of COVID-19 was registered in Russia in the end of January. As of April 14, there are 21,102 registered cases, more than 60% of which are in Moscow. In January-February preventive measure mostly included some restrictions on travel from/to China. The policies gradually became more restrictive during March, when Russia first limited the number of flights to/from Europe and then temporarily suspended all flights with the rest of the world, except for specially organized flights for returning Russian citizens from abroad back to Russia, restricted the entry of foreign nationals to Russia, restricted the operation of cultural facilities, and canceled sport events, transferred schools and universities to a distance learning mode, and mobilized the health care system. On March 25, President Vladimir Putin has declared the week of March 30-April 3 as a non-working week. Then, this regime was extended until April 30. The regional authorities were delegated a right to introduce/simplify restrictive measures within each region individually according to the epidemiological situation in this region.

Common measures in the Russian regions include restrictions on retail trade, services, cancellation of cultural events, and self-isolation policies. These measures have a substantial impact on daily life. According to the recent surveys of the Russian public opinion research center, 82% of respondents are highly informed about the coronavirus, the majority of respondents stopped personal meetings with friends and acquaintances and reduced the time spent outside, and 56% find the preventive measures taken by the Russian authorities to be sufficient.

A System of Electronic Permits

The virus prevention policies and travel restrictions have so far differed substantially between the Russian regions. For instance, from April 15 a Moscow Mayor decree has introduced a system of electronic permits for traveling within or nearby the city by any public transport, including taxi, and any individual transport. The permits are issued for different purposes, e.g. commuting to work, commuting to a medical facility, and commuting for personal reasons, including attending a grocery store. The latter permits are the strictest and can be issued no more than two times per week. Any prospective traveler older than 14 has to apply first for a permit via the electronic government form, sms, or a call. The code is valid for one day, although those whose work does not allow home office can apply for a permit with a longer validity. The permit is issued as a 16-digits QR code that contains information on the day of validity, purpose of travel, and personal details of a traveler, and should be either printed or saved on a mobile device and shown to a police officer upon request. Only a few categories of citizens can travel without such permits, including state and municipal officials, judges, attorneys, notaries, military staff, and journalists. The violation of the travel rules and quarantine measures implies a fine up to ca. 500 EUR for individuals and up to 6,000 EUR for firms. Except for police officers, the commuting within a city will be tracked via telecommunications billing, street video cameras, and bank transactions.

From March 30, a similar policy has also been introduced in the Republic of Tatarstan, a Russian region in the Volga Federal District. Citizens who would like to attend medical facility, funerals, city administration office, child facility, court, bank, or post office must apply at most two times per day for a sms code, which will be valid for one hour. Commuting to a work does not require such a code in case a written notification from an employer is issued. Walking within 100m from home is also allowed without such a code. In most regions, individuals older than 65 as well as those with chronic diseases are recommended to stay in self-isolation.

Starting from March 25, the Communication Center of the Russian Government publishes daily reports on the number of registered COVID-19 cases in Russia overall and in each region and on policies introduced to prevent the spread of the virus and to support the economy and vulnerable population groups. According to the information from the Communication Center of the Russian Government, countrywide policies include (as of April 13, 2020):

The first reflections on a possible economic impact of COVID-19 on Russia suggest a decline in GDP growth following both the decline in oil prices and the decline in economic activity due to the epidemic, a severe impact on population and businesses in the Russian regions, especially related to a decline in the services sector, and underscore the necessity of governmental measures and public-private partnerships to support both large and small and medium size business.

The Czech Republic, one month into lockdown

Olga Popova, PhD, is an economist. She is a senior researcher at the Leibniz-Institute for East and Southeast European Studies.